Lean versus green. And the winner is…..

Most interior horticulturalists will have encountered this phenomenon in recent years: clients had to cut costs on those things that are considered a luxury. Most often the plants at the office are the first to be victimized. Besides, a working area without plants is more quiet and functional as is asserted by the ‘lean’ thinkers, thus killing two flies in one swat. The idea being that, in a world where people lose their jobs, it’s not done to invest in plants and other non-functional extras.

No matter how wide-spread this conviction is at the moment, there is very little scientific proof to back it. On the contrary, it was the opposite that was demonstrated (Haslam & Knight 2006): plants do increase the concentration and productivity of workers and are in fact a sound investment. This means it’s high time for a study investigating whether ‘lean’ really improves quiet concentration, or whether it’s the other way around and it might not be so clever after all – even if it seems to be such a smart way to cut costs.

Does lean mean more or is it the other way around?

Four scientists from three British universities and one Dutch university have investigated three fairly large field studies in this area  to see if this is true: does lean mean more? Or is it the other way around: can people concentrate better, are they happier with their workplace and more productive if there are plants in the office?

In what ways do plants work their wonders on the work floor?

Generally speaking, several studies in the past years have turned up three significant reasons:

Experiment 1: The green and not so green areas of the ‘office garden’ of a consultancy firm

The final factor mentioned above – the boss looking after the employee – certainly played a role in the first experiment. This took place in a fairly large office (4,875 m2) of an international consultancy firm in London. It was housed in a large open-plan office with some adjoining smaller meeting rooms. Half of the large office area was decorated with plants and the other half was kept ‘lean’.

The employees were asked questions twice: eight weeks before the arrival of the plants (T1) and three weeks after they were put in place (T2). Each time about 60% of the employees participated in the questionnaire, unfortunately the overlap of both groups was small: only 30% of them filled out both questionnaires. In absolute numbers they were 67 people. And whether they worked in the lean or the green office area: in terms of age or function they were similar.

The people in the green area scored better with respect to concentration and productivity. But, strikingly so and possibly because it was one large office space, both groups scored better in the second questionnaire, on all points, the green group scoring even better than the lean group. 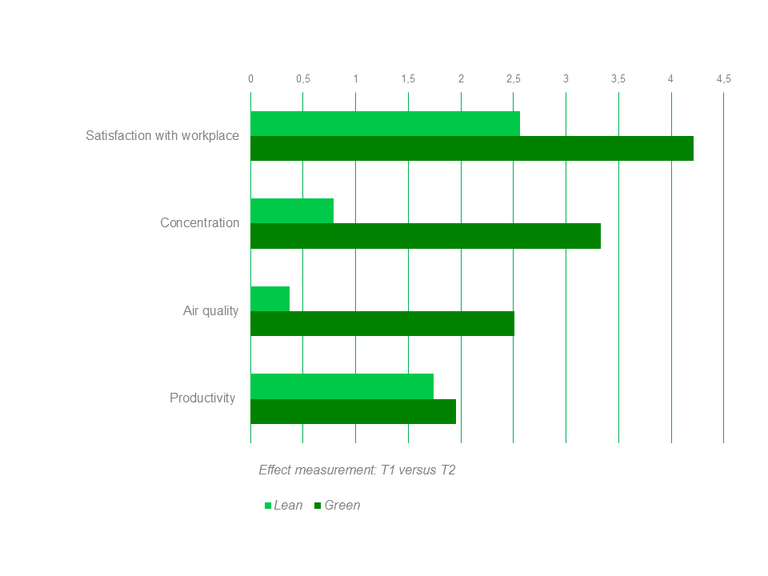 Experiment 2: lean and green call centre floor at an insurer

The results in the graph above, indicating that employees of both halves of the open-space office felt better, was not seen in this second experiment. Here, two identical call centre teams were compared, each located on their own office floor, measuring 360 m2, in the same building. 75% of the employees answered the questionnaire at the start of the project (T1). 70% of the respondents participated in the questionnaire two weeks after the plants were put in place (T2) and 3.5 months later, still 58% of the employees participated. And in this case as well, a large number of the questionnaires couldn’t be used because they didn’t join in all three times. In terms of age, sex and work experience, the groups could be compared well.

However, another issue did arise. For the employer a productive helpdesk employee is a fast-working helpdesk employee. And this type of productivity did not increase noticeably by the plants. Apparently it also has nothing to do with concentration, because this did rise significantly. The most striking positive aspect is the worker’s satisfaction with the workplace. This really improved after the introduction of plants in the workplace and remained on top even after 3.5 months. This can be explained by the relatively dull job of these workers. Apparently plants do make a difference in the satisfaction with the workplace if this is the case. 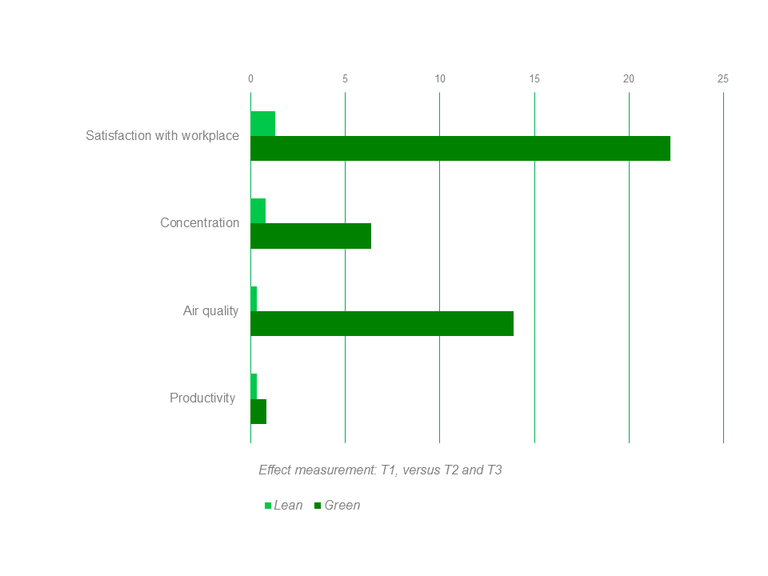 For the third experiment a consultancy firm was used again. Here the question was if an office space filled with plants would lead directly to an increase in concentration and productivity. Two-thirds of the staff joined in the experiment, with 16 male and 17 female respondents, aged 22 to 33 years. These were put into two identical rooms, safe for the presence of plants of course. The workers were asked to execute two tests. One in which they had to answer difficult questions and one where they had to select and process a lot of information in a short time. Both tests took stock of the speed and accuracy of the employees. Half the respondents did the tests looking at three plants, at least; the other half did not have this view. 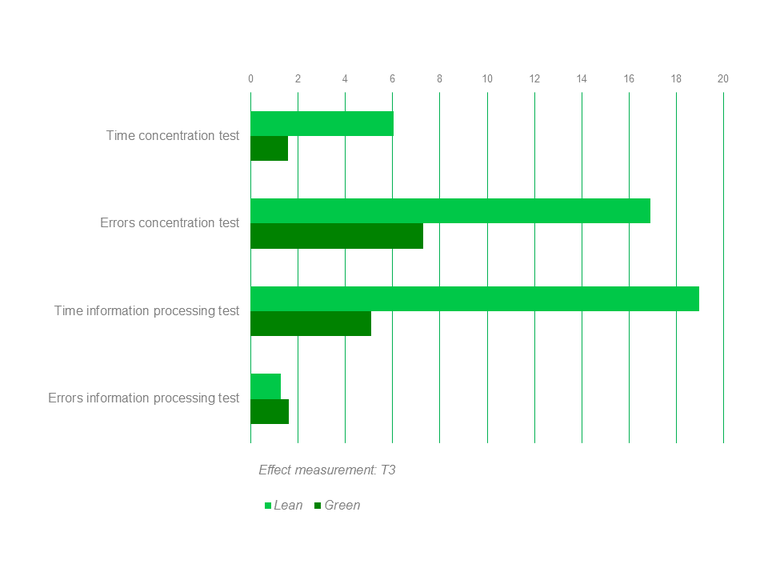 The results are quite clear: in the area with the plants present both tests were finished quicker and with fewer errors. This corresponds with research that was carried out in the past. Please note: for the first time ‘green’ has shorter lines in this graph, but this is a correct representation: less does mean more in this graph.

The first two studies could demonstrate the effect of plants on the experience of the workplace well, and that this increases on all levels. The third experiment showed that concentration and productivity will rise significantly if there are plants in the office. All these results correspond with earlier research.

The ‘the boss looks after me’ factor deserves more in-depth observation in follow-up studies of the ‘lean’ office. This will heighten the participation of the respondents in this group especially and will make follow-up results more reliable.

Based on these studies one could come to the conclusion that plants do benefit the workers as well as their output. Putting plants in the office is a sound investment with actual financial returns for an organization. Also, we can see there is no proof for the domineering zeitgeist and present-day managerial claims. The contrary is true: green clearly wins!