And the air purifying or waste processing champion is….

Do you have many plants in your home? Besides being beautiful to look at, that is also very healthy. You would not think so, but volatile organic compounds (VOCs) such as benzene and formaldehyde are very common in the home. These toxic substances are found in clothes, furniture and carpets, for example, as a result of which the air quality in houses, offices and schools is often very poor. This, in turn, can cause poor concentration and headaches. It is therefore vitally important that we make our indoor climates healthier. Plants can help us do just that. Plants are known to be able to absorb these toxic substances and thus purify the air. Our waste consequently feeds our indoor plants and they give us our oxygen and clean air in return. How do plants do that? Where are the filters in a plant? Are they in the foliage, the stems, the roots, or is it the work of another, as yet unknown force?

How do leaves and stems purify the air?

For a long time, research primarily concerned the aerial components of plants. Researchers discovered pores in the leaves and stems of plants. These stomata on the foliage absorb toxic substances out of the air. The more stomata, the higher the plant scores in terms of air purifying qualities. This Egyptian study from 2012 reveals The Spider plant (Chlorophytum comosum) and Peace lily (Spathiphyllum) to be particularly good at absorbing volatile organic compounds from the air with their stomata, for example. Some plants even adsorb small quantities of certain toxic substances in a waxy film on their leaves. In short: above ground, plants can convert significant levels of toxic substances.

However, plants consist of more than foliage alone. In recent years, more and more researchers have also been looking below ground and examining the plant’s thus-far hidden air purifying qualities. It appears that the roots purify the air by absorbing a little of the toxic substances. However, it is primarily the bacteria and fungi living around the roots (the micro-organisms in the rhizosphere) that work themselves crazy to convert the majority of the toxic substances to harmless compounds.

In a South-Korean study from 2008 into how aerial and root-zone parts of plants contribute to the removal of formaldehyde, two species of pot plants were compared day and night. The plants were placed in sealed chambers, where they were exposed to a specific quantity of this toxic substance. The below-ground plant components, the root zone, proved by far to absorb the most toxic substances. This is because the micro-organisms in the root zone do not only work in daylight; they carry on working through the night. While a plant’s leaves take a nap, so to speak, the fungi and bacteria in the soil continue to purify the air. In other words: in daylight a plant’s leaves are also hard at work and soil life then counts for 50% of the air purification (1:1). The night-time ratio is very different, however. The leaves then do practically nothing at all whereas the micro organisms in the soil carry on working just as hard, if not harder. 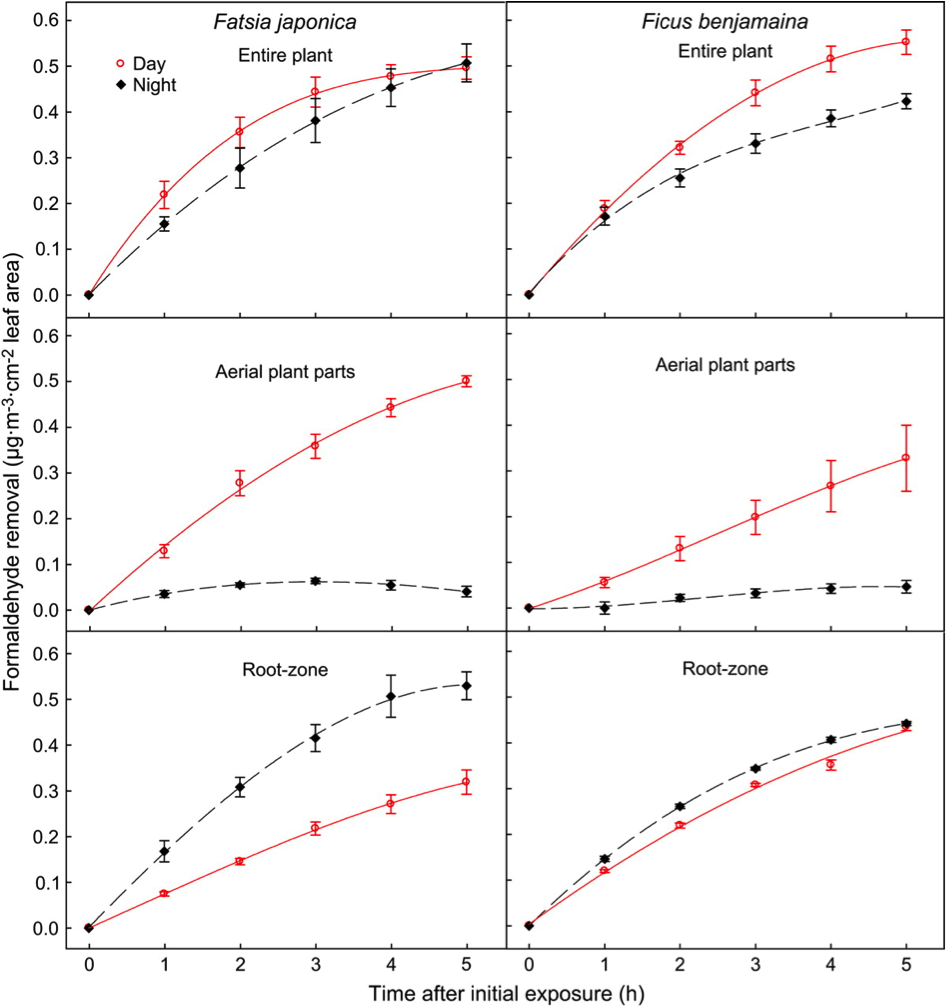 This night-time working of bacteria was not the only interesting discovery about soil life. Research by Wolverton in 1993 revealed that the longer the microorganisms are exposed, the more they improve their detoxifying ability. So not only do they work 24/7, they also improve their ability to remove toxic substances from the indoor climate.

Plants and microorganisms live in mutual dependency. The plants supply the bacteria and fungi with sugars and the soil life supplies the plants with minerals and other nutrients in return. Plants secrete a certain sap that attracts bacteria, which is why between 100 and 1000 times as many bacteria are found in the rhizosphere than in soil with no vegetation. This applies to the soil in your garden, but also to the potting soil your indoor plants are growing in. Furthermore, these saps encourage bacteria in the rhizosphere to improve the biodegradation of soil pollutants. 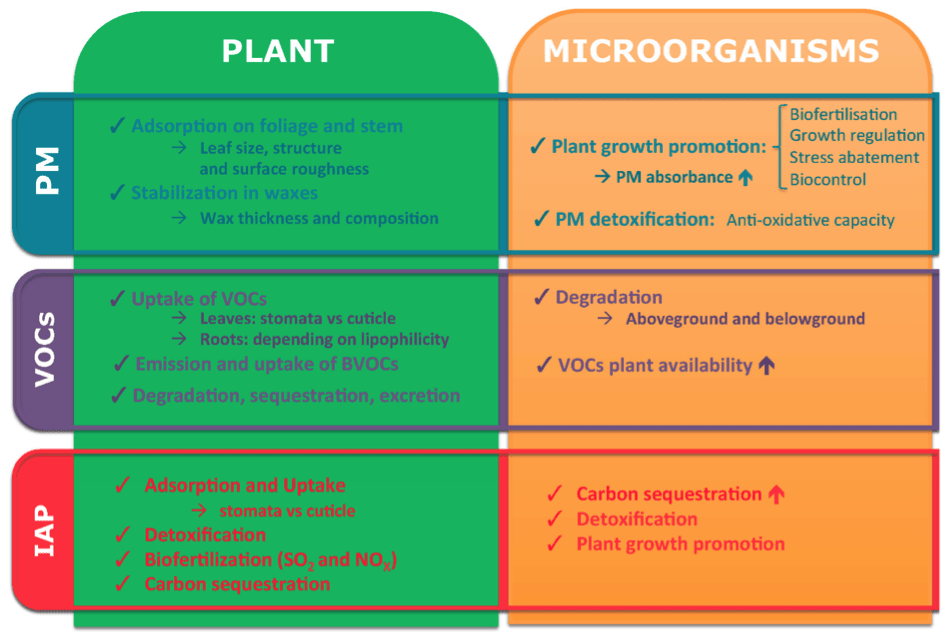 Did you know that bacteria do not only live below ground but that the stems and leaves of plants are also covered with these invisible air purifiers? In 2015, a Belgian-Polish study specifically examined these air-purifying interactions between plants and microbes. The researchers concluded that there is tremendous unused potential in the symbiosis between plants and such microbes as bacteria and fungi. They called this purifying effect of plants phytoremediation: the use of plants to clean up contaminated sites.

How does phytoremediation work?

There are several ways in which plants and their soil life can purify their environment. Some plants are capable of absorbing harmful chemicals from the ground and groundwater and removing or converting them. Other plants can purify water or air. 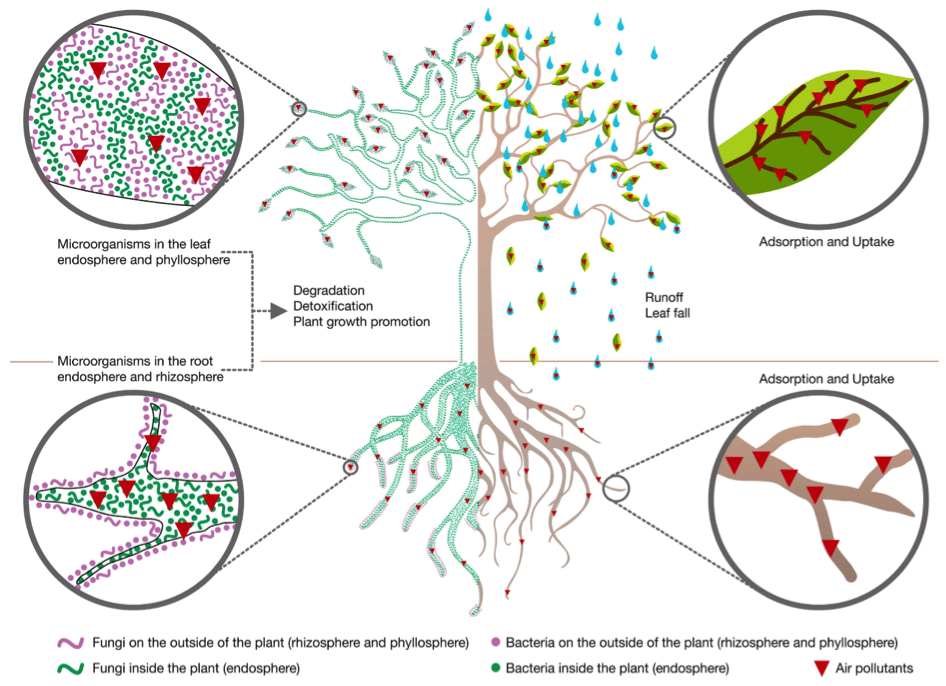 Diagrammatic representation of microorganisms working on or near a plant to purify the air: phytoremediation. (source: www.mdpi.com) 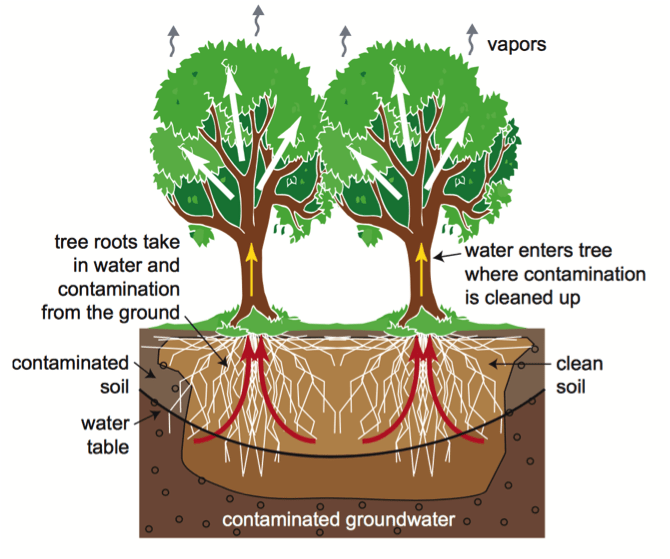 Back to indoor plants

Potted plants do not usually come into contact with contaminated ground or groundwater. Most important with regard to the indoor climate, therefore, is that the last natural process of phytoremediation is applied: air purification. Soil life is essential to this process.

A plant living in symbiosis with certain bacteria and fungi can contribute significantly to clean air and a healthy (indoor) climate, and to clean soil and water as well. The foliage, stems and roots all do their best, but really good results are not achieved until the fungi and bacteria join in the process. Microorganisms such as bacteria, both below and above ground, are the absolute champions in detoxifying their environment. Phytoremediation is consequently a promising technique used to remedy contaminated environments; both indoors and outdoors.