The past months, with global COVID pandemic and related policies and regulations, have been quite difficult for many and the sector of interior landscaping forms no exception. The duration of the pandemic and its effects in the near future are still fairly uncertain.

In order to gain insight in the specific challenges for the sector and how to best offer support, in April EILO organised an online meeting for its members to exchange experiences and strategies and, following from that, a questionnaire in four languages was sent out in July.

In August replies were sent in by owners/ managers from 34 companies in 15 different countries in Europe & in the UK.

Like many other companies those in the field of interior landscaping have suffered, both economically and mentally. However, many expressed faith in the resilience and future of their business. Possibly, the existence of government support systems in a number of countries have contributed to that feeling of optimism.

We are impressed by the resilience of our sector and feel that it is incredibly encouraging.

We will follow developments closely and support you through activities on a variety of subjects. With the expectation of COVID still being present and/or having a second wave in most countries in the coming months, we plan to send out this questionnaire again at the end of the year in order to learn how to best support you in the mid- term too.

At the time of the questionnaire, COVID had had no effects on company size.

*Please note: not all questions had a 100% reply rate.

How was business affected by COVID

We asked about a number of subjects ranging from work on current projects to starting new ones, effects on personnel. Most companies were affected in some way with regards to all of them, with some being hit hard on all.

For only seven companies current work could go on as usual, and with regard to maintenance jobs just nine could perform all tasks. Two couldn’t perform any maintenance work. Only three companies were able to start new projects as planned, all others had to uphold those to some extent. Six companies were not able to start anything new.  As far as sending quotes to prospective clients, only five were not affected while seven could not send out any.

Sixteen companies were lucky enough to not having to let people go, but for all others COVID led to partial unemployment due to loss of work; for five companies even up to 75%.

Most companies were able to (tele)work from home in administrative tasks & project management, and virtual meetings with staff and clients. For ten however, this proved not to be a possibility. 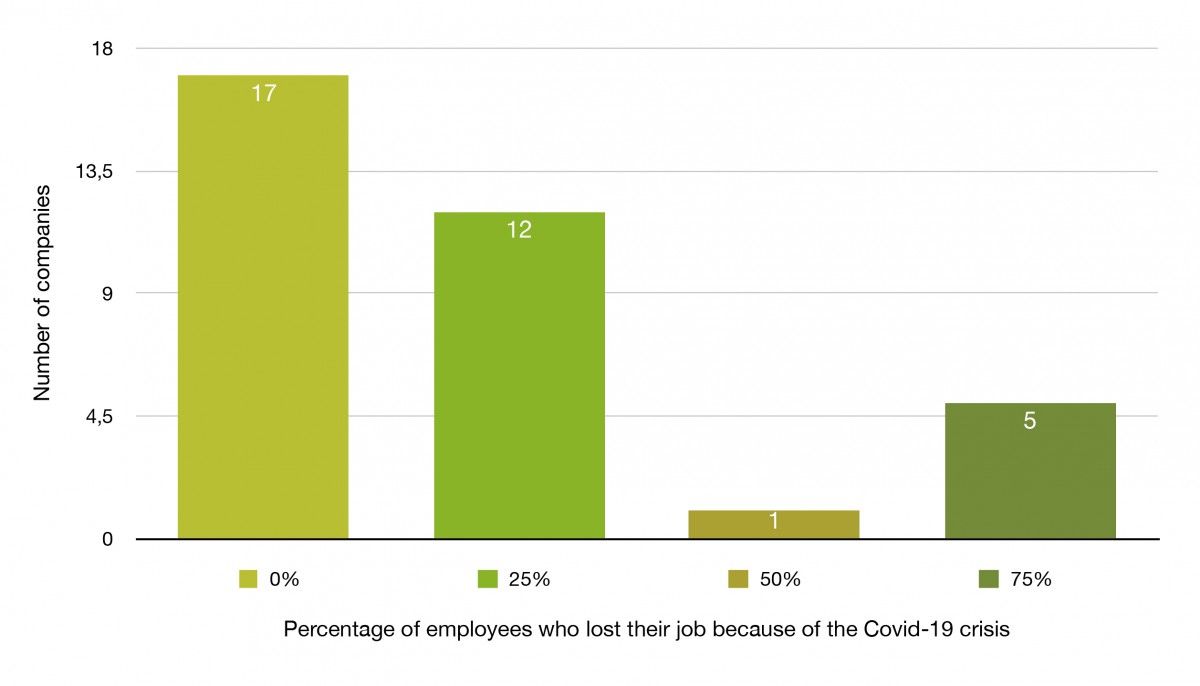 Most companies were affected to a certain amount with regards to sending quotations to prospective new clients. Only five were not affected, with seven companies not being able to approach any prospective clients at all.

Having to uphold the start of new projects.

One company remarked about the positive effect of -after having trouble to keep up with all  request before COVID – now being able to catch up with many of their counterparts in facility, sales etc. now working from home.

It was remarked that some clients suspended contracts for a few months.

For one company especially business in cut flowers and fruit was hit.

Nine companies were able to perform all maintenance work, although it was remarked that gaining entrance to buildings was difficult at some point due to lockdown and some clients. Eighteen were affected in 25%, three in 50% and two in 75% of their maintenance work. Two companies couldn’t perform any maintenance at all..

Percentage of personnel affected by the crisis

Sixteen companies were lucky enough in not having to let people go. However COVID did lead to (partial) unemployment.  Five companies reported personnel being affected in 75% loss of work, one 50% and twelve in 25%.

Being able to (tele)work from home

For ten companies working from home proved to be impossible. Seventeen were able to do 25%, three did 50% and three 75% of their work through teleworking/from home. One company performed all their work in this way. 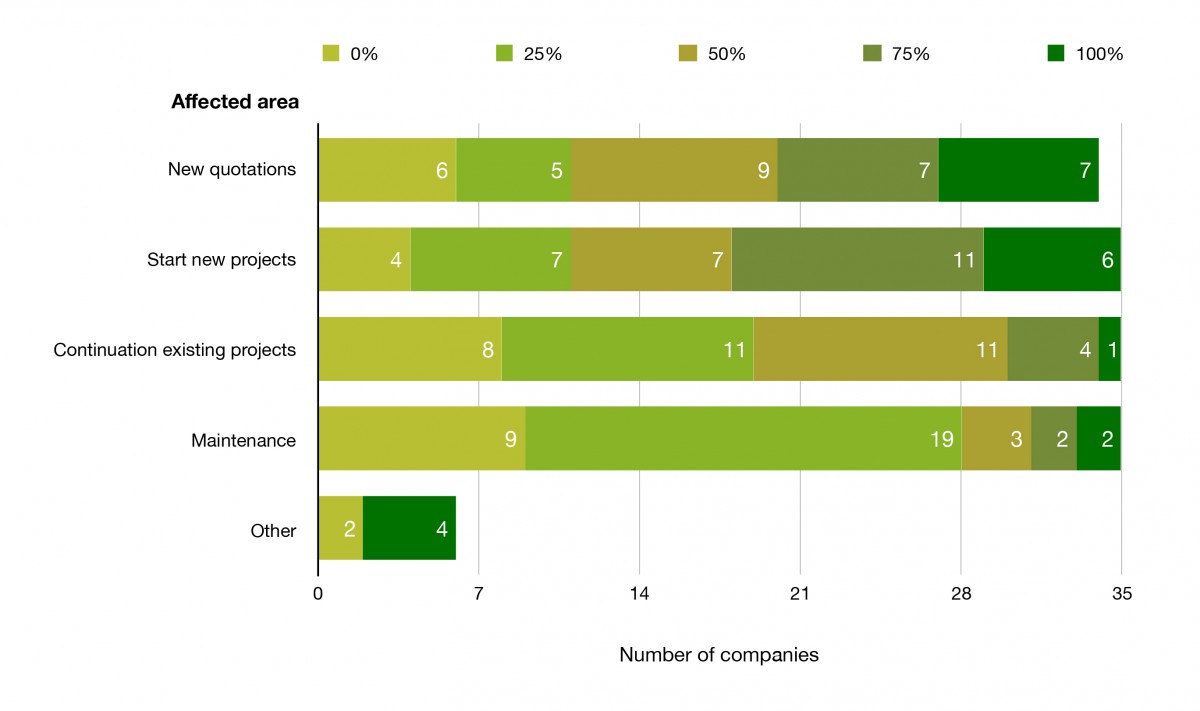 The current crisis and its effects notwithstanding, we were heartened by the overall expressed optimism when asked about the near future. New, so-called 1,5 m. products’ were seen as most probable. While nine companies did not expect to develop anything new in that field, all others saw possibilities to some extent. Some of you expected to gain new types of clients too. Opening up new markets was seen as the least feasible with seventeen companies expecting no new possibilities at all.

When asked whether you would require to develop new skills, twenty-three companies said that you would be able to develop those within your own company.

Ten companies did not see any opportunities arising, thirteen companies expected new types of clients to make up for 25% of their business.

Nine companies expect no new business in this field, thirteen expect for those products to form 25% of their business, four 50% and one company feels it might be 75%.

Seventeen companies did not expect to open up new markets, five companies think it might be 25% of their business, three expected 75% and one company expects to 100% concern themselves with new markets.

Eighteen companies did not expect to develop new types of services. Six companies thought that 25%, five that 50% and one that 75% of their business would consist of new services.

Some stated that their new opportunities and project were already underway before and unrelated to COVID.

It was remarked that ‘virtual’ project management as well as new concepts, sales etc. through new media would gain importance. One company did not expect COVID to change their portfolio at all.

The need for new skills

When asked whether they expected a need for their employees to develop new skills and competences, eight respondents felt there was no need for them to do so. Sixteen felt they would and that these could be easily developed within the company. Seven felt the need and expected it to handle it within the company but it would take some work. One company expected to have to hire new personnel with new skills.

We all feel the pressure of the last months on our mental state and for those who answered our question if and to what extent COVID had had any mental effects ( ranging on a scale from 1 (hardly  – 10 burn-out) ) most of you reported effects to some extent. Twenty positioned themselves at 5 or higher.  Only a few of you said to (very) mildly have been affected. 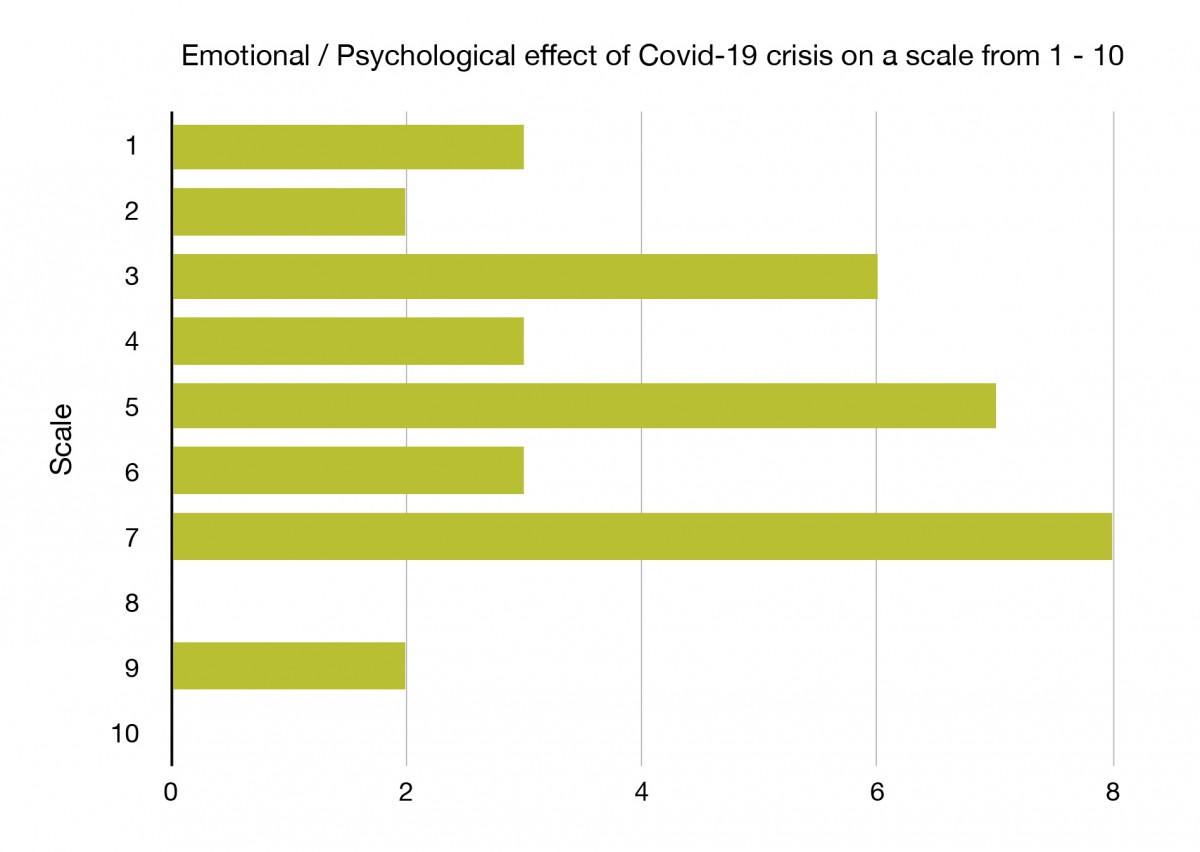 Overall you responded in a positive note. Some of you even managed to grow their business. Most of you responded to be economically in good shape or in a good survival position. That is great to hear.

In depth: expectations for the company

For the near future eight companies expecttheir business to be in good economical shape, twenty predict it as bruised but healthy, and six feel it to be severely damaged but with good hopes to survive. 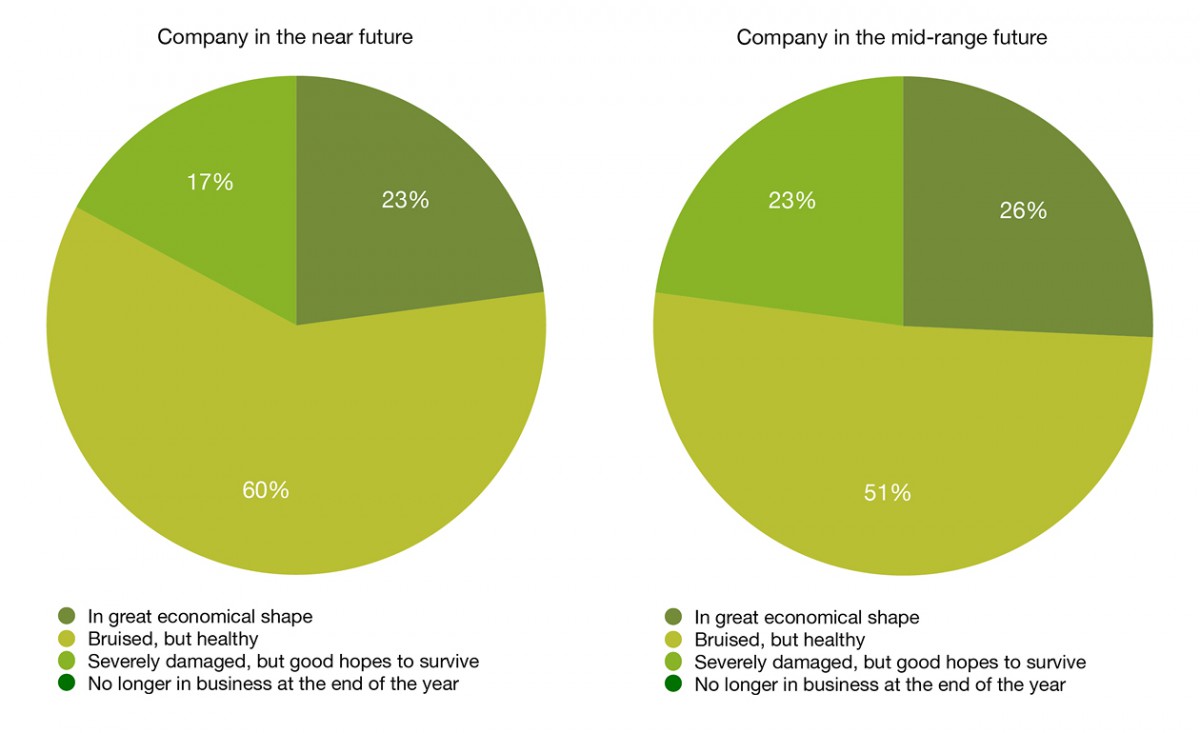 Apart from wanting to keep in touch to support one another and learning about the situation and future developments in the different member countries respondents you showed us you want to take time now to learn more.

The top 5 items you want to pick up are:

The role of plants in the 1.5 meter society

And learning about online seminars and courses are your number one

And seen as less important are:

The spread of COVID in buildings

The spread of COVID in buildings

Four companies expressed an urgent need to learn more about the virus and it’s spread in buildings, eleven thought it would be good to know more, twelve companies had no interest in knowing more.

Seven companies expressed an urgent need to learn more, thirteen thought it would be good to know more, five expressed a maybe, five companies had no interest in knowing more.

Nine companies expressed an urgent need to learn more, fifteen thought it would be good to know more, four expressed a maybe, two companies had no interest in knowing more.

Three companies expressed an urgent need to learn more, fifteen thought it would be good to know more, six expressed a maybe, seven companies had no interest in knowing more.

One company expressed an urgent need to learn more, fifteen thought it would be good to know more, four expressed a maybe, nine companies had no interest in knowing more.

Five companies expressed an urgent need to learn more, twelve thought it would be good to know more, three expressed a maybe, four companies had no interest in knowing more.

Seven companies expressed an urgent need to learn more, nineteen thought it would be good to know more, three expressed a maybe, three companies had no interest in knowing more.

The role of plants in the 1,5m society

Sixteen companies expressed an urgent need to learn more, ten thought it would be good to know more, three expressed a maybe, three companies had no interest in knowing more.