Plants. The more you discover, the less you appear to know!

One of the conundrums behind the message Into Green conveys, that plants make people healthier and happier, is the question how plants purify the air. The fact that plants filter Volatile Organic Compounds (VOCs) such as Formaldehyde or Benzene from the air was first demonstrated in the nineteen-eighties, when W.C. Wolverton published a high-profile study on the subject. Performing a study for NASA, he researched how good air quality could be maintained inside a space capsule, even for a whole year, and discovered that plants could contribute to that significantly thanks to their ability to break down all kinds of chemical compounds. Besides substances we exhale, these also include substances released from building materials and plastics, for example. And all the plants required in return was water and light. They didn’t get used up nor blocked or contaminated which, given the situation, was highly efficient. He continued to research the phenomenon, and even published a book with the top 25. Job done, you would think: study performed, these are the top 25, these are the plants we should grow in our homes and offices. However, the inclination to jump to conclusions and compile Top 10 lists too readily can hinder good research for years. Because plants are living things and naturally grow very differently in real life compared to a test environment. Stress in plants, due to inadequate light or water, for example, is immediately reflected in their performance. There are also numerous varieties within the different species and the more research we conducted, the more complex it all became. The ability of plants to break down harmful substances was also shown to vary significantly from one substance to another, so when is air completely ‘purified’? And despite all these revelations, that one key question remained unanswered: how do they do that?

High time for an orderly new test by someone who has more than earned their spurs researching air quality in greenhouses. In the context of the top sector programme De Groene Agenda (The Green Agenda),  Dr. Pieter de Visser was commissioned to create some order in the 30-40 years of research since Wolverton. He first read up on the existing research before testing for himself whether the various claims were reproducible. We paid him a visit.

The role of water

There was one area in which he was soon able to make a firm point. Despite the fact that different studies sometimes contradict one another, as indeed they should in science, in his research design he was equally able to demonstrate how plants are particularly able to absorb Formaldehyde through their leaves. This absorption behaviour, as well as the breakdown into harmless compounds substantiated by the literature review, is probably reproducible for all water soluble pollutants such as Ammonia and Sulphur Dioxide. These substances are absorbed through the stomata of plants and into the plant’s ‘ordinary’ photosynthesis/ decomposition process and aids the production of sugar and oxygen, provided the concentrations are not too high. 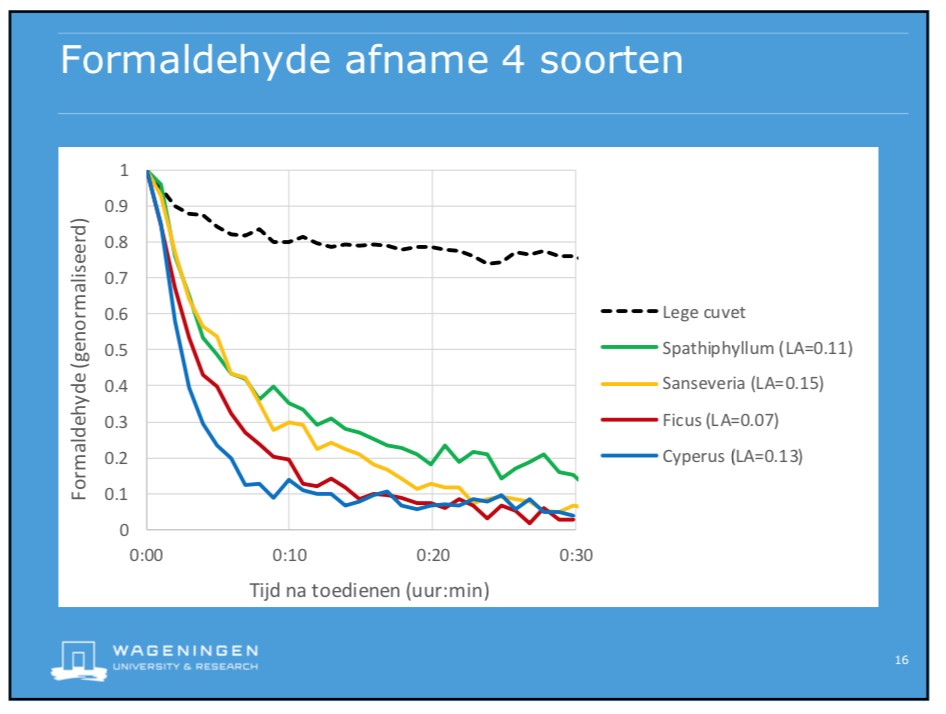 The test in which he compared the reduction of Formaldehyde in the air by plants with the reduction that occurs when only water is introduced was particularly interesting. The reduction was practically the same in both cases. However, as Pieter points out, plants do something with the substances they absorb, turning them into sugar or oxygen, which water does not do. So to remove the Formaldehyde from a space altogether, you would have to replace the water continuously. So water does bond but does not convert the substance. 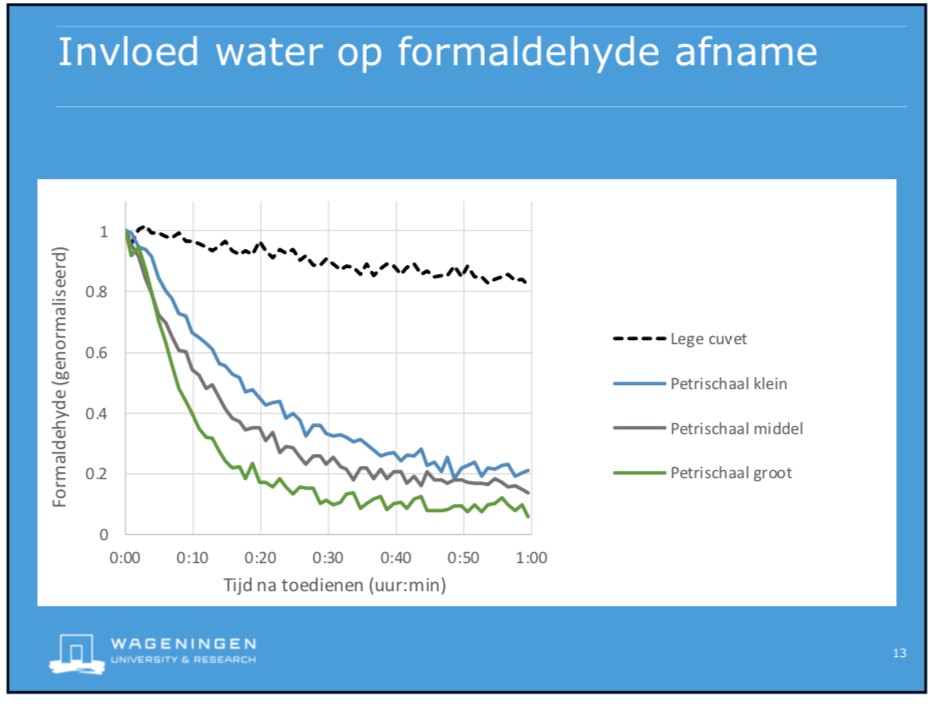 The route of substances that bind to fat

But, Peter soon wondered, what part do plants play in breaking down fat soluble or lipophilic VOCs such as Xylene or the extremely hazardous Benzene? This had been poorly researched until now and it emerges from both literature studies and his own practical research that the absorption and possible breakdown of these substances occur in a different place altogether. Not in the leaves, in fact they are hardly absorbed or broken down by the plant at all, but primarily by bacteria and fungi. These live partly on and near the leaves but mostly around the plants’ roots. Where the plant and soil life meet, sugar (from the plant) is constantly exchanged for all kinds of substances that the plant needs from the soil and which fungi provide in abundance. During that process, the VOCs are included as food source. Or, as Pieter put it: ‘Thanks to their huge gene pool, microorganisms have so many enzymes available that they adapt very easily and then break down whatever is present.’ The prospect of compiling a definitive top 10 any time soon, became even less likely, but Pieter continued his research. ‘While the plant did reduce the level of Xylene in the air (= ‘depletion’ in the graph below), we discovered that the xylene that attached to the plant and the test equipment were later released back to the air. This so-called re-emission is an effect of the chemical balance with the surrounding air and I would very much like to research this further. Because while xylene levels certainly are reduced by plant absorption, this stops at a certain point, when the balance has been reached, and we want that reduction to continue.’ 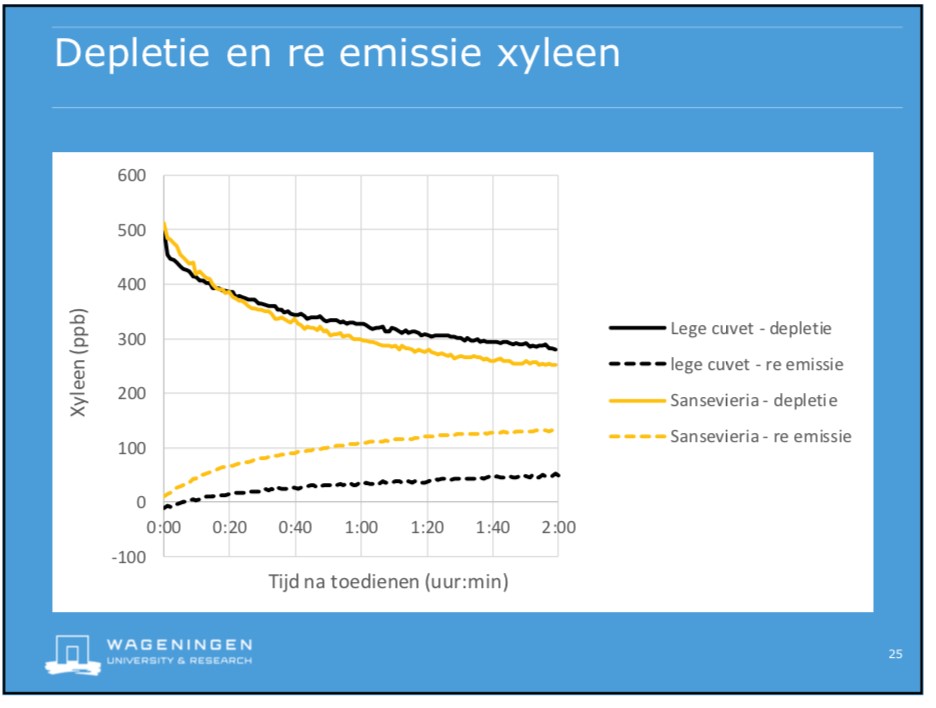 The test apparatus is a breakthrough

One of the biggest hurdles at the beginning of this research was the question: how can you test how plants (or the microorganisms living with them) do what they do? The existing test apparatus at WUR only enabled researchers to blow air at plants and watch how the plant reacted in terms of growth or flowering: fewer leaves, fewer fruits, less growth. However, the commissioner of this study also wanted to know what happens to the substance. Pieter goes as far as to claim that his team is the first research group to devise a set up that can measure not only the air but also the water and the soil. So you can see exactly what is left in the air and what disappears into the plant and the soil. 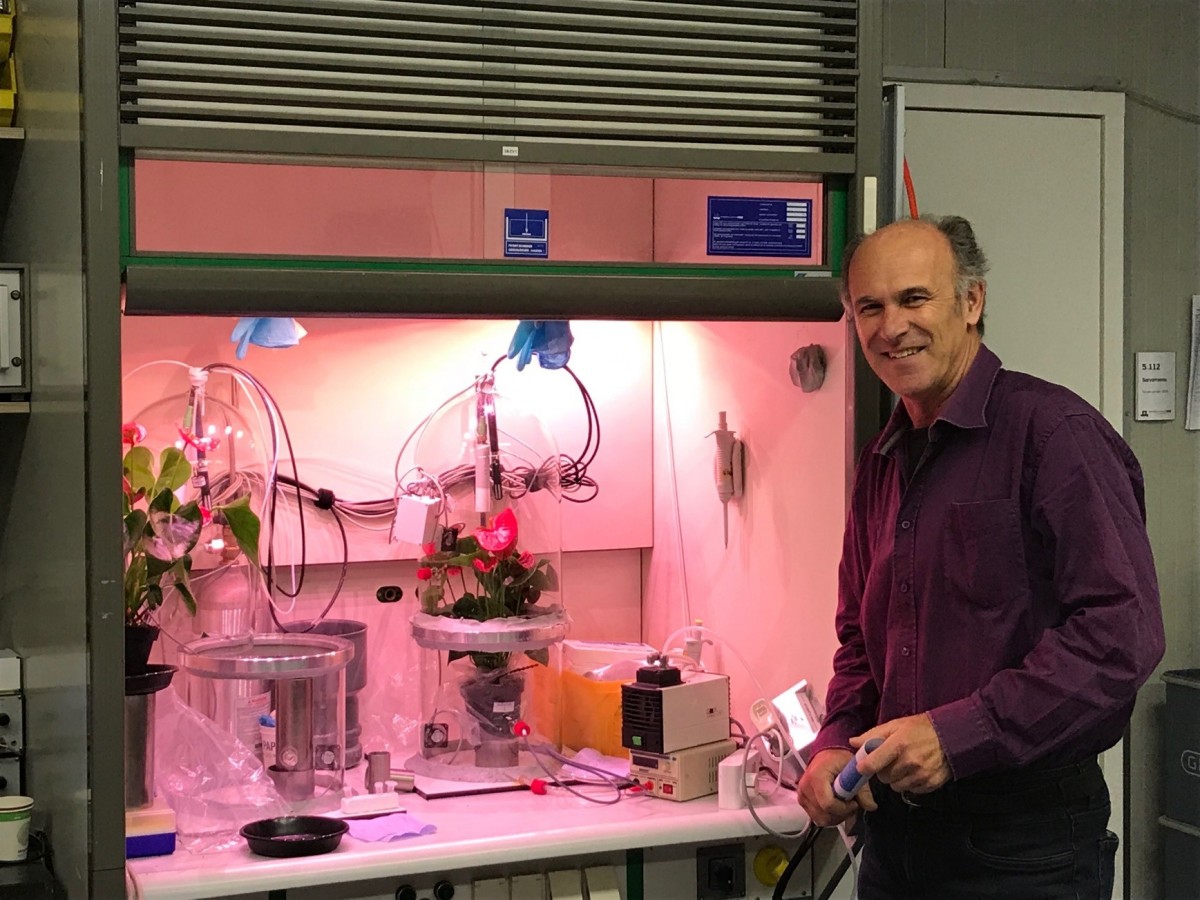 Where do we go from here?

He explains that this study is really only just beginning. This broad research can and must now be narrowed down to a specific area of focus. What effect do poor light and water conditions have? Or what part does the pot play? What happens to the VOCs that bind to fat if you accelerate the supply of air. He also wants to learn more about the role of time and the tendency that plants and their microorganisms apparently have to achieve a chemical balance, and how they actually work together. This is all very difficult to research and before you find the answers, you gain other, unanticipated insights revealing realities that are even more complex and fascinating than you had ever imagined. But then, that is the beauty of science. We will follow developments with interest.