Plants can talk. For a long time, that belief was dismissed as woolly nonsense. But the more we come to know about plants and their properties, the more scientists are becoming convinced that plants really can communicate. And they do that quite ingeniously. Plants pick up signals from their surroundings, process that information and convert it into solutions to enable them survive. As Darwin would say: plants are intelligent. Plants and people actually have surprisingly much in common.

Plants are often deemed the lowest in the ranking of living organisms. Many languages have such expressions as ‘vegetating (like a plant)’, meaning leading a meaningless, soulless life. Yet even in ancient times the question of whether plants ‘had souls’ was much discussed and over the centuries various philosophers and scientists have repeatedly claimed that plants are social organisms and attributed them with certain skills. Until recently, however, this could not be proven and their claims were dismissed as figments of their imagination. Or as science fiction, like in the well-known film Avatar where the inhabitants of Pandora, a planet in the distant future, believed neuron-like electrochemical connections existed between the roots of trees and plants, which collectively formed a nervous system that covered the entire planet, and had a consciousness. Gaia 2.0.

However, recent years have seen the publication of ever more studies which establish the intelligence of plants on the basis of extensive and serious scientific research, and even the emergence of a new field of research: plant neurobiology.

The advantage and disadvantage of being rooted

One of the main differences between plants and humans or animals is the the first group cannot move. If we are hungry we go looking for food, if we sense danger we run away or make a loud noise. We move house if we think we could find a better job elsewhere or when adventure beckons. Plants cannot do any of those things; they are rooted, bound to one spot and therefore completely dependent on their environment. In order to survive, therefore, they had to develop other, sensory mechanisms. And they did. These mechanisms are now known to be highly complex and refined. 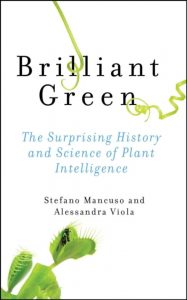 One of the strongest advocates of plant intelligence is plant physiologist Stefano Mancuso of the International Laboratory of Plant Neurobiology. In the book ‘Brilliant Green’ he and his co-author, scientific journalist Alessandra Viola, reach the conclusion that plants are actually even more intelligent than humans. Whereas we only have five senses, they have more than twenty. Which they use very efficiently.

One of the key characteristics of plants, according to Mancuso and Viola, is that they have a modular structure. That is to say that while each part of a plant is important to its survival, it is not indispensable. The vital functions of a plant are not centralised in single organs; the whole plant functions as a kind of super organism. Some plants can be almost completely eaten away yet still recover.

Plants can ‘see’. Light, the main ingredient of their energy diet, is vitally important. Not only are plants able to capture and utilise light; via light receptors, found all over the plant but especially on the leaves, they are also able to recognise the quality of the light and to adapt their growth habit accordingly.

Plants can also smell. Plants are covered with receptors for volatile substances. They transmit a chain of signals, passing on information to the whole organism. Plants use ‘scents’ or chemical compounds to interact with their surroundings and with insects. They absorb messages and also release them, when they are exposed to stress, for example. A plant that has been eaten into, will disperse molecules to warn conspecifics in its vicinity of the danger. These neighbouring plants will subsequently produce chemical substances to make their leaves inedible or toxic. The senses of smell and taste are just as closely related in plants as they are in humans and animals.

Plants can taste. In plants, the organ of taste consists of receptors for the chemical substances they feed on. The roots search for these substances in the soil. Plants taste nitrates, phosphates and potassium with their roots, and can locate minimal quantities even at long distances. They do this by allowing their root system to keep growing until all the substances have been absorbed. If the roots encounter substances which are toxic to the plant, however, they will move as far away from them as possible.

Plants also have a sense of touch; such as the well-known ‘touch-me-not’ whose leaves close when touched. It is interesting that this does not happen if a drop of water falls onto it and that the leaf will open again if a stimulus is not or no longer dangerous. Carnivorous plants only close when certain insects land on the leaf, other plants trap insects until they are completely coated in pollen and then they release them again. Many plants demonstrate their sense of touch by winding round objects, enabling them to grow vertically.

Plants can also hear. That is to say: they sense sound vibrations. And they respond to them too. An Italian winegrower, for example, grew his grapes to the sound of music. The results were astounding: the grapes grew faster, were healthier and tasted better.

Plants have developed many more senses besides these five; senses plants can use to their advantage because they cannot move. Senses which enable them to measure the moisture content in the ground, sense gravity and electromagnetic fields, and recognise and measure numerous chemical gradients in the air or soil. All aspects that are essential to their survival, growth and development.

Plants make use of electric, hydraulic and chemical signals to communicate both internally and externally. And make decisions accordingly. For example, in the middle of a hot day, plants can decide to close the stomata on their leaves. This stops them from photosynthesising. But it also stops them from dehydrating,  which then takes priority. They communicate externally by touching each other’s roots or leaves, for example, or by emitting molecules that contain information. Based on that information, a plant may decide to act hostilely or rather to form a symbiosis. Plants also communicate with animals, by producing an attractive or repulsive scent, for instance. Which they can do very cunningly. They are capable of emitting chemical substances that will attract their enemies’ enemies, such as a mite which will eat the mites that attacked the plant. Of course, their scents and colours also enable plants to attract insects and other animals in all kinds of ways, which then act as ‘pollen courier’. Thus ensuring their survival in another spot. Scientific journalist Michael Pollen described it poetically: ‘bees are the legs of plants’. The medium of exchange is usually nectar but some plants are even capable of fooling their visitors by changing shape, scent or colour. There is actually an orchid that can change to resemble a female insect ready to mate. So plants continually make decisions that can influence life or death.

The wood wide web: the benefits of exchange

Practically all plants have intimate relationships with fungi through their roots. Hyphal threads in the soil digest dead animals and plants and release this to plants in the form of carbon. In return, the plants provide the fungi with sugars. Both prefer to exchange with whichever gives them the most in return. So they make choices. The gigantic underground mycorrhizal network that interlinks plant roots, and can be many kilometres in diameter, is nicknamed the ‘wood wide web’. Plant biologist Suzanne Simard of the University of British Columbia, discovered that trees communicate with one another via fungi and that they share carbon and other nutrients with one another, even between different species. Birch trees exchanged CO² with spruce and at a different time in the season the same thing happened in reverse. She also discovered the important role ‘mother trees’ play in this web. These larger, older trees are the hub of the web, as it were, and control the nutrients of the whole network. Simard also discovered that mother trees feed their own saplings more carbon than other trees. It even appears that mother trees that are on the point of dying send extra carbon and defence signals to their saplings via the mycorrhiza network.

Simard’s standpoint that forests are not merely collections of individual trees but resilient, social communities, is endorsed by former forester Peter Wohlleben. One day in the forest he discovered remarkable gnarled specimens, which at first sight resembled lifeless stones but were in fact the remainders of an ancient tree trunk that had been felled centuries ago. To his utter amazement, they turned out to still be alive, despite having no leaves and photosynthesis consequently and the uptake of nutrients thus being impossible. Further research revealed that the remainders were fed by the surrounding trees, via the roots. Apparently the forest would not benefit from losing these weaker members. For Wohlleben this event sparked a continuous fascination for the behaviour of trees.

Wohlleben describes trees in human terms; they can suffer pain, make friends, raise their children, collaborate, sorrow. They give each another space – a phenomenon so poetically described as ‘crown shyness’ – or shade, so that saplings can grow at the slow rate that is best for them.

His book ‘The Hidden Life of Trees’ was a bestseller in many countries. Wohlleben now manages his own forest, where trees are allowed to grow entirely as they please and where he gives people guided tours to introduce them to the wonders of the wooded world.

That is perhaps the crux of the matter. Inspired by their fascination and wonder, Mancusco, Simard and Wohlleben are all passionate advocates of a different approach to the plant world. Based on the concept of symbiotic communication between plants, enabling a positive development of the whole ecosystem, we should show more respect for plants. And adapt our relationship with them and thus with the planet. Not only would that be more sustainable, it would also be in our own interest.
After all, plants, which account for 99% of the biomass on Earth, form the base of the food pyramid, give us the oxygen we breath and the energy we use, and mitigate the consequences of climate change. On top of which they are also able to detect and tackle substances that are harmful to us or to provide ingredients for medicines. As Mancuso and Viola maintain: the planet will survive without us.

The question is: will we survive without plants?